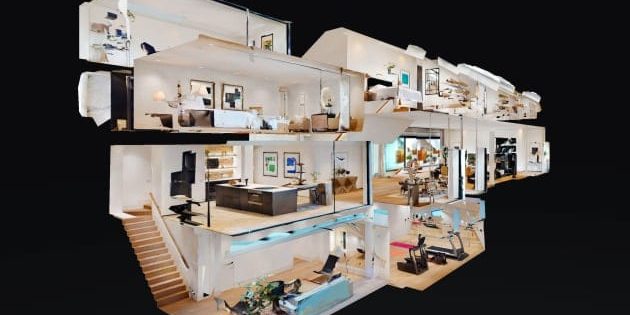 James Sharp, a realtor in the Dallas area, has seen a flood of transactions over the last few months since he turned to making 3D virtual tours of his properties. He’s had so much recent success selling houses online that he put his own residence on the market at the end of June — he had 18 showings in the first 10 days.

“I decided I’m done, I want a change of scenery,” said Sharp, who founded the Sharp Real Estate Group in 2011. “I’ve seen the market and seen what we were selling. I’m making a great payday.”

The U.S. economy may be in a recession from a public health crisis and five months of forced shutdowns, but the housing market remains strong, thanks to record low mortgage rates and the desire of many city dwellers to relocate, knowing they can work from anywhere. Technology is playing a major role.

Online listing sites Redfin and Zillow reported better-than-expected second-quarter results in the last couple weeks, in part because virtual tours have become so effective. Both stocks closed the weeks at record highs. Zillow CEO Rich Barton said on his company’s earning call late Thursday that three of four adults say they want to use virtual 3D tour technology to buy a home, part of a “tectonic shift that we expect to play out for years to come.”

Redfin and Zillow this year

Zillow, which has its main offices in Seattle and San Francisco, just told employees they can work from home indefinitely. Twitter and Atlassian have done the same, while workers at Google and Facebook will be remote for at least another year.

That’s driving down rents in San Francisco, New York and Seattle, three of the 10 most expensive markets in the U.S., as well as Los Angeles and San Jose, California, according to Zumper. Apartment contracts in Manhattan fell by more than half in July as residents fled to the suburbs.

Nationally, however, home prices rose 4.9% in June from a year earlier, up from 4.1% growth in May, according to CoreLogic. Prices climbed 1% month to month, the fastest monthly gain for June since 2013.

Sharp said his firm, which sells homes in and around Dallas, started using virtual tour technology in May after transactions slumped in March and April. By July, he said, business was up again, and August is poised to be his best month ever based on deals in the pipeline — he has 15 houses under contract, totaling $16 million, about triple his average month.

While virtual tours have been around for many years, Sharp said Matterport takes you to the next level so it’s almost like physically being there. By getting every angle and every nook and cranny, floor to ceiling, and layering the images on top of the house’s digital floorplan, the walkthrough feels close to realistic.

Sharp compares it to the “Star Trek” transporter machine that teleported characters to a different time and space.

“It gives you the same ability to beam to another place,” said Sharp, who’s been giving guided tours to potential buyers over Zoom.

During the pandemic, Matterport has rapidly transitioned from being a niche product used by big budget groups in commercial and residential real estate to a standard technology for realtors of all sizes across the country. The company told CNBC that from the beginning of March to mid-June, it saw a 157% increase in the number of models created per week.

In May, the company introduced an iPhone app that lets users capture and share 3D tours without needing to buy one of its pricey professional cameras or even a cheaper off-the-shelf alternative. It’s the company’s latest shift from hardware to subscription software, now charging by the number of spaces scanned.

RJ Pittman, Matterport’s CEO, said the company hadn’t planned on rolling out the iPhone app until the fourth quarter. The Android version is still scheduled for later this year.

“Covid hits and a whole bunch of things happened in the first few months of 2020, so we decided to bring the iPhone launch early,” said Pittman, a former eBay executive who was hired to lead Matterport at the end of 2018. “All these people were sheltered in place and screaming for tools to keep the real estate industry running while the economy and the world were shutting down. We thought if you could create an open house while sheltered in place, it could play a big role.”

Redfin has been using Matterport’s technology since 2014. The company said in May that views of virtual walkthroughs were up over 300% since the pandemic began. Zillow has its own proprietary technology for virtual tours, including an iPhone app, though realtors can add Matterport-powered tours to their listings if they choose. The company said on its earnings call that sellers have tripled their use of 3D home tours since March.

All three companies are in very different positions than they were in the early days of the pandemic. In March, Zillow and Redfin paused the homebuying operations of their businesses because of safety concerns and stay-at-home orders. The next month, Matterport laid off about one-third of its workforce, or 90 employees, as the company sped its shift to software. Around the same time, Redfin laid off or furloughed 1,000 people, with demand down 40%.

That was four months and an eternity ago. Glen Kelman, Redfin’s CEO, said on the company’s earnings call on July 30, that demand snapped back by June and he’s been rushing to get employees back on board.

“We had to hire as many people as quickly as we could,” Kelman said. “We’re now hiring above and beyond that, but we need to do that to get back to really strong share gains.”

In a survey conducted last month and published Aug. 5, Redfin said that 25% of respondents indicated that the pandemic has made them want to move or has sped up their plans to relocate.

Jay Acker is seeing that activity firsthand. His firm, the Real Estate by Design Group, in Denton, Texas, sold 14 homes sight unseen in 2019, and has already done at least that many deals so far this year, mostly in the past 90 days. Acker said he expects to reach 25 remote sales this year.

His company bought its first Matterport camera a few years ago, then added another for its office in San Antonio and is considering purchasing a third. Acker said the 3D tour was a popular service pre-Covid-19, but has become the default method for showing properties and initiating transactions since March.

“There are a lot of California and Colorado defectors coming,” said Acker. “The cost of living is super cheap and it’s a very attractive place to be if you can bear a couple months of really hot temperatures.”

Virtual tours and no-touch viewings: house hunting and renting in the time of coronavirus
04/04/2020